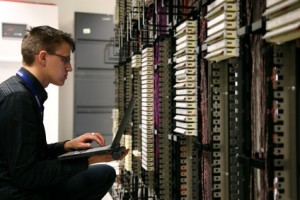 I read a cover letter of IT professional that was one of the most general I have every seen. It was over 300 words long but didn’t say anything of substance. In the IT field, technical skills and experience with those skills are the critical factors. Despite this, the candidate failed to specify anything about their technical skill.

I am writing to express my interest in the position of [Network Administrator / Help Desk], advertised as being open with your company at this time.

Now, you need to understand that I haven’t advertised a network administrator or help desk position in a very long time. In fact, my firm doesn’t advertise positions much any more. We are very proactive in our sourcing of candidates for our recruiting clients. This resume was completely unsolicited.

Here is what I think happened. The job seeker had a template for their cover letter that they customized.  Over time, they grew frustrated with the lack of success and moved towards a mass mailing strategy, deciding to send their resume to hundreds of recruiters. They attempted to write a very general cover letter that would appeal to the greatest number. By doing this, they minimize their odds of impressing each recruiter.

In particular, putting the job title in brackets leads me to believe that the job seeker wrote this cover letter with the intention of replacing the actual job title each time they sent it out. When they decided to send out resumes to recruiters that didn’t advertise a position, they took the short cut and just sent the template without any changes. Not a great first impression.

The start of the resume highlighted specific skills and experiences.  The job seeker had a number of impressive accomplishments, good skills and several certifications. Overall, I would say a pretty good network administration candidate. This was completely opposite to the impression the cover letter made.

Fortunately, the resume led off with several details that helped make a strong impression. If it had not, there is a good chance a hiring manager would read only the first few lines and discarded the resume.  The cover letter made such a poor impression the resume would only get a very quick look.