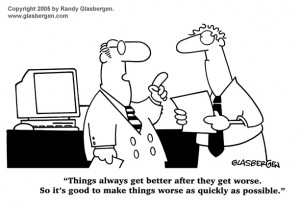 I received the CareerBuilder Hiring Forecast for 2009 along with a few other reports from CareerBuilder recently. There are a number of interesting items in the reports, and two in particular that jumped out to me.

The hiring forecast compiled data from 3,200 hiring managers. Interestingly, most said they were increasing or maintaining staffing levels. Only 16% said that they planned to reduce the number of permanent full-time employees in their location.

This may come as a shock to a lot people. The only news you can find talks about how bad the economy is. The economy is bad. We’re in a recession. January’s unemployment figure is due out today, and I expect it to be bad.

So, how can the CareerBuilder figure be right? As bad as the economy is, it is still running. We have unemployment around 7%… that means 93% of the workforce is employed. Companies also moved aggressively to layoff workers at the end of 2008 to position themselves for ’09. Many facilities are now staffed to ride out the downturn.

Additionally, many hiring managers understand that the average recession lasts about a year, and we haven’t had a recession lasting more than two years since the great
depression. We’re already a year into this, so the hope is that by 2010, we’ll be on the path to recovery. There is no guarantee that this will happen, in the 1800’s, we had two recessions last more than five years without an upturn. Our situation is bad, but doesn’t compare to the situation at those times. One of the prolonged recessions occurred after the War of 1812, when Washington DC was burned by the British, and the other occurred in the early 1870’s with the county still trying to recover from the Civil War.
Fortunately, our country is in much better shape than at either of those times.

We don’t know when the economy will start growing again. We don’t know which companies are going to hire and which will layoff. We can’t be sure of much right now, and the negativity in the news can be overwhelming.

If you need a job, the only option is to forget the stats and headlines. Aggressively work to find your next job. Maintain your self-confidence. There will be job seekers that desperately need a job but lose momentum in their search expecting failure with each application.

No matter how bad the economy becomes, there will be millions of people that find jobs in 2009. To be one of them, you need to be positive, confident and proactive. Attitude and effort will make a huge difference in your search.

Employers are using social media sites to assess job seekers. A social media site is a website with a community of users that interact. MySpace and Facebook are the two biggest, but there are a lot more out there. Of the managers that checked social media for a candidate, one-third found a significant reason to reject the candidate based on what they found.

Some of the common problems that were identified included drug and alcohol use, inappropriate conduct, a bad attitude towards past employers, poor communications skills and lies about the candidate’s qualifications. If you have online public profiles, you need to maintain a basic level of decency.

You should also google your name to check what information is on the web about you. It is so easy to do a search on a candidate’s name, it will become a common screening procedure at many companies. You should at least know what they are going to find.