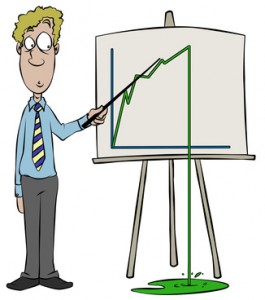 One of my primary goals in writing the this blog is give you the ability to look at your resume the same way a recruiter or hiring manager will. I ran into a resume today that illustrates a common mistake I see, although this example is worse than most.

The resume is from a salesperson with fifteen years of experience. The resume listed a number of great accomplishments. There were bullets where the job seeker had exceeded their annual quota by significant percentages. Other bullets showed their ranking within the company or region – for example, top five out of three hundred sales associates at one position.

The work history looked good. Then, at the start of 2007, the candidate took a new sales job. The new position had one bullet, “Sell comprehensive line of…” and a list of products. The listing had nothing about the success of the individual. No details of the territory, customer base, training or anything else about the position.

My reaction to this resume is simple. The job seeker had been successful in the past but failed dismally in their most recent position. I can’t think of any reason why the job seeker wouldn’t give some detail of their performance for this position if their performance was good. Describing this as a dismal failure may seem strong. I have to assume the candidate did not meet or exceed expectations in any way.

I also read the cover letter closely. My thought was the candidate might have a reason why he didn’t detail the position. The company many have had financial difficulty or the sales process may not have been a fit for the candidate. These reason could mitigate a failed position. The cover letter mirrored the resume, emphasizing the past and skipping over the most recent position.

I expect the job seeker left out details of this position because he has trouble acknowledging the failure. The career track record shows a pattern of success. It doesn’t appear that he has had to deal with failing before. The easiest thing for the job seeker is to skip over the position and emphasize his accomplishments. I’m sure this seemed like a good idea, but it doesn’t create the impression the job seeker wants.

The best way to deal with this is to be upfront and give some detail. The job seeker should explain their performance. If the performance was below expectations, then the job seeker should explain way. I’m not suggesting that they job seeker needs a bunch of excuses – that’s the wrong approach. He just needs to provide an honest assessment. For example, shortly after starting the position, the company may have experienced a change in a their operations that made their products less competitive. Stating this by itself is just an excuse. Adding details about how the company’s sales dropped significantly would make it understandable that a new salesperson would struggle.

Often a resume tells as much about the job seeker from the lack on information as it does from the information is included.