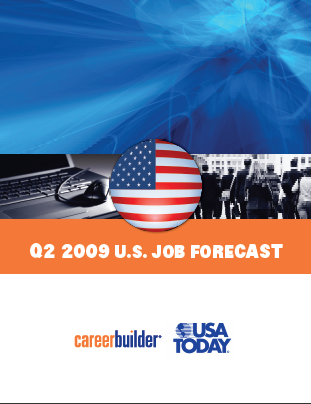 Career Builder released their 2nd Quarter job forecast recently. The report showed a slowing in hiring – just as we would expect in our current economic situation.  Companies are laying off workers, cutting hours, reducing benefits and freezing hiring. There were a number of positives in the report, though.

For many firms, maintaining staffing levels requires continued hiring. Employees will still leave and need to be replaced. In fact, some of the companies reducing staffing levels may still need to hire to replace the loss of key employees. Although only 13% of the hiring managers said they were increasing staffing levels, the number who are doing some hiring could be as high or higher than three out of four companies.

The hours worked per employee were less positive. Again around a quarter of the firms made cuts, but this time only 5% increased the hours worked. The difference between this measure and the measure of the number of employees is a results of how companies are reacting to the recession. They are cutting hours and benefits, while trying to maintain staffing levels. Every manager knows that the company who maintains their staff and is ready to grow coming out of a recession will gain market share. The challenge is cutting enough to survive the recession, but not cutting too much.

You can read the full report at http://img.icbdr.com/images/aboutus/pressroom/Q22009forecastreport.pdf